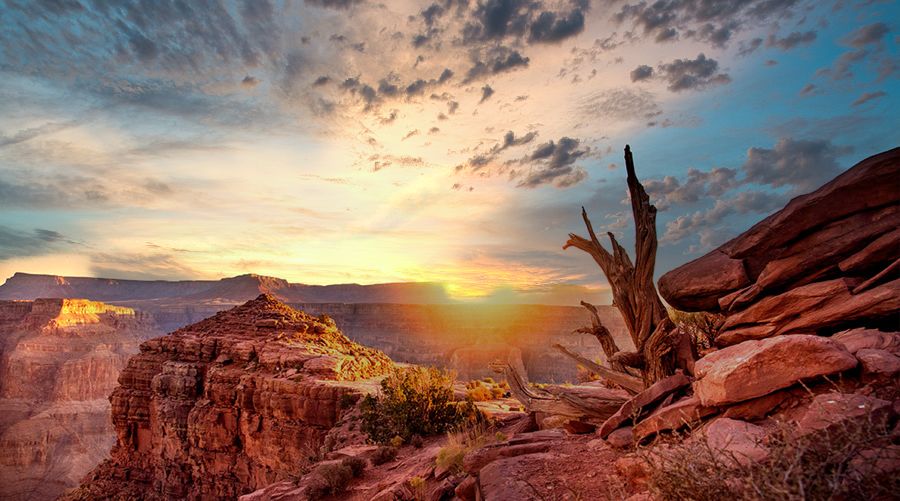 Interesting Historical Facts About the Grand Canyon You Should Know

Grand Canyon is the most stunning natural wonder in the world. The rock formations with beautiful colors and dramatic cliffs is fascinating in many ways. For scientists, geologists, historians, adventurers, and all types of visitors, it is a true treasure trove of amazement. It has something for everyone. It has the most incredible views, culture, history, rocks, biodiversity, animals, tribal culture and so much more.

It is natural that the Grand Canyon has an amazing history. Some of the facts about the Grand Canyon makes it a great stop while visiting Las Vegas. If you are planning a visit to this amazing place, don’t forget to checkout some of geographical information on line. It will only add to the enigma.

Its rich history makes it one of the most stunning natural tourist attractions in the world. Here are some of the most interesting things about the Grand Canyon:

Grand Canyon doesn’t subscribe to general weather conditions of the surroundings as it has its own. This might sound like a bit far-fetched, but it is true. Grand Canyon can actually create its own Weather. There is a perfect reason for it. Sudden change in the elevation can have a huge impact on the temperature and precipitation. Different parts of the Canyon can make you experienced different weather condition. For instance, Bright Angel Ranger Station on the North Rim is the coldest and the wettest weather part of region. Meanwhile, the hottest part of Grand Canyon is at the Phantom Ranch located at the bottom of the canyon and can be seen from the Bright Angel Lodge.

Read More: The Best Reasons to Visit the Hoover Dam

The Grand Canyon is 270 miles long, and is 18 miles wide and is one mile deep. This makes it one of the largest canyons in the world.  The walls of the Canyon streatch a mile high or more and actually shows a cross section of Earth’s crust, which is 2 billion years old. You can imagine the level of interest that most geologist must have in it. These rock formations provide them with a unique opportunity to study the evolution of this massive land mass.

The oldest rocks in the Canyon have been named as the Vishnu Basement Rocks.  And is located in the Inner Gorge and that was formed around 1.7 billion years ago.

The Grand Canyon has evidence of of life in the prehistoric era as far back as 12000 years. The archaeologists believe that the ruins and artifacts found in the canyon tells about the prehistoric humans that had first settled in Grand Canyon region during the last Ice Age. This was the time when prehistoric life forms like the mammoths, giant and sloths still roamed the Earth. Presence of spears made from large stone do tell us that the humans once lived here more than 12000 years ago.

There are many split-twig figurines in caves of the canyon and dates back to 1000 to 2000 B.C. The figurines resembled animals like deer and bighorn sheep. They could be a part of ritual for ensuring successful hunting.

It is a well-known fact that the Grand Canyon is home to many tribes. Some of the ancient tribes that inhabited Grand Canyon were the Pueblo, Paiute, Navajo, Zuni and Hopi tribes. Now the Havasupai tribe claim the place as their ancestral home and the beautiful waterfalls in the lower canyon are shown in many travel magazines. Tours to this area is conducted by horseback to the inner section of the reservation They have lived here for more than 800 years.

At one point, the Havasupai had lost their ancestral land by the government to create the Grand Canyon National Park. Thankfully, after an intense media campaign, the Havasupai were able to regain a large part of their lost land from the government. Now, most of the money earned by the tribal people come from the tourism and is approx. 3.5 hours from Las Vegas. The popular West Rim is the closest area of the canyon from Las Vegas. The famous Skywalk is located on the West Rim was commissioned by the Hualapai Tribe and financed by a wealthy businessman, David Jin now managed by the Hualapai Indian tribe.

These are some of the historical facts about the Grand Canyon that makes it so interesting. What the Grand Canyon is today is the result of what happened millions of years ago. The tribal people of the canyons are a testament that shows how diverse the Grand Canyon actually is. Visitors can view the canyon and get to know the tribal life up and close and personal.

Vegas Tours offers the best Grand Canyon South Rim bus tour. You can book the tour from Vegas online and get confirmed reservations. All the buses and coaches are designed for comfortable and safe traveling. The narrated tour will keep you engaged throughout the journey. Note: that some of the areas of the South Rim may not be open at this time due to Covid Restrictions.

The tour companies that offer excursions to Grand Canyon by bus operate with a limited seating and spacing on the motorcoach. All seating and equipment is sanitzed. Face Masks are required of all guests.